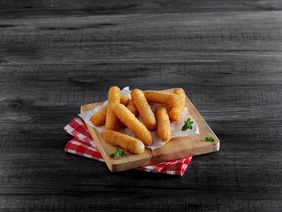 How irresistibly crispy can you get! The Frostkrone Food Group has just brought out its bestseller product, the Mozzarella Stick, in a brand new look, dressing it in an even crunchier coating and tweaking up its recipe. This really special crispy coating means that the Mozzarella Sticks now come out of the oven in your kitchen with an even higher "crisp" factor than before. Just one bite into their soft, melt-in-the-mouth centre and the magic begins, with the delicious delight of mozzarella creating a perfect balance between cheese and crispiness.

Mozzarella Sticks from Frostkrone have been a popular classic for years, permanently flavour of the month in supermarket freezers, always sought after by all kinds of customers. And the reason is plain to see: these cheesy sticks can be prepared quickly and easily in the oven and they are always blissfully tasty.

But from now on snack fans are going to be treated to even more crispy, crunchy pleasure.

Preparation is completed in virtually the twinkling of an eye. And all the more surprisingly, the results then turn out better. Because the coating now gets so crunchingly crispy in the oven while the lusciously melting mozzarella in the stick's centre begins to unfold its aroma. The tasty red pepper dip adds the final note of perfection to the snack experience.

A truly crispy highlight for when you're feeling peckish at the computer, when relaxing in front of the TV or when you meet up with friends to chill.

ABOUT THE FROSTKRONE FOOD GROUP

Frostkrone - with its headquarters located in the town of Rietberg, in the federal German state of North Rhine-Westphalia - is specialised in the production and marketing of deep-frozen finger food and snack products. Since its founding in 1997, the company has established itself as an innovative trendsetter in the deep-frozen, convenience food segment.

In addition to the frostkrone Tiefkühlkost GmbH and the Bornholter Käsevertriebs- und Produktionsgesellschaft GmbH, since 2018 Piz’wich Europe SAS and Varenne Gastronomie SAS have also been part of the Frostkrone Food Group. In 2019 the US-American business Rite Stuff Foods Inc. swelled the ranks when they joined the Group. Since February 2020 Innovate Foods Ltd. from Great Britain has also belonged to the corporate group.

The Frostkrone Food Group stands out in sharp relief because of its incredibly wide variety of finger food and snacks. The Group markets its products in the food retail trade and also in the food service industry. The many-faceted range of products is available worldwide in a great deal of countries including those in Scandinavia, the Netherlands, France, Spain, Portugal, Great Britain, Switzerland, in the eastern European countries, Asia and in the USA.